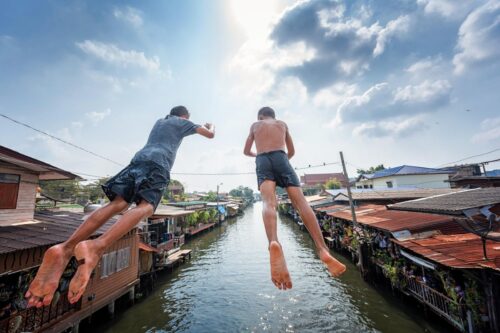 The fort was built before the palace. It was formerly named Wichayen after Chao Phraya Wichayen (Constantine Phaulkon), the Greek who closely served King Narai of Ayutthaya. Phraya Wichayen was the one who begged the King to build the fort as a defensive measure against Hollanda marine force.

When King Taksin ascended the throne, he built the palace near the fort, and renamed it as ‘Wicahi Prasit Fort’, where he later was executed. The palace became the residence for many generations of Chakri dynasty royal family. In King Rama V’s period, the palace became Royal Thai Naval Academy.

In 1955, Royal Thai Navy renovated the palace to be the Royal Thai Navy Headquarters, the graceful building which was recognized by the UNESCO Asia-Pacific Awards for Cultural Heritage Conservation in 2004. Location : In the area of Royal Thai Navy ueodeugrtore Arun Ammarin Rd..

Wat Hong Rattanaram was named after the Chinese wealthy man who built it. Thus, it was known in the past as ‘Wat Chao Khrua Hong’ in King Taksin’s period. The temple was very important because it was located near the palace, which the King had restored thoroughly. There is a holy water pond inside Wat Hong Rattanaram with its legend that every time before going to war, King Taksin would bath himself in this pond.

The bathing ritual still goes on today. In King Rama IV’s period, Phra Saen was brought from Chiang Taeng in 1858 because the King had learnt about the legend of this beautiful Buddha, and the neighborhood was full of Lao people. According to the historical resource, Phra Saen was built by Phra Kru Pon Samek, one of the important monks in the history of Lan Chang, with more than 192 kilograms of copper and brass.

Built in the reign of King Rama I by the second Phraya Chula Ratchamontri of Rattanakosin (Agayi), Kudi Charoen Phat was named after the Saphan Charoenphat 33. The architectural design of the mosque is in the Manila style with a beautiful decoration of openwork carved wood which is a defining feature of the gingerbread house style.

Tonson mosque is the oldest mosque in Bangkok which was built since the Ayutthaya period. Tonson Mosque was formerly known as ‘Kudi Yai’ or ‘Kudi Bangkok Yai’ because of its location near the mouth of Khlong Bangkok Yai.

In the reign of King Rama II, Tonson Mosque was restored to a concrete masonry building and the pediment decorated with Thai lacquer work. The dome of Tonson Mosque is in Egyptian style in the year eight hundred of the Hegira calendar and inside there is the ancient board of Arabic calligraphy. Location : Itsaraphap Rd., close to the Khlong Bangkok Yai.

The museum is situated on the Rit Narongron School Premises. It was originally the house of Khun Luang Rit Narongron (Jek Saengmanee). The museum building was built in 1923 during the reign of King Rama VI.

The museum is a two story structure that’s half Thai and half European architecture, embellished with decorative motifs of a combination of eastern and western artistic styles. The prominent feature of the building is a teak winder staircase wit a centre pole. Location: Soi Uwittaya, Phet Kasem Rd. soi 4. Open Mon-Fri. 08.30 am-16.30 pm

It is a big, populated and old community, located near the Khlong Sanam Chai which links with many other canals: Khlong Dao Kanong, Khlong Bang Khun Thian, Khlong Lad Ched Na, Khlong Bang Mod, and Khlong Dan which leads to the Chao Phraya River.

Wat Sai is the old community centre, built in the Ayutthaya era. This temple is more than three hundred years old. There are many styles of Buddha ages which are made of carved red sandstones. There is ‘Golden Palace’ which is a delicate Thai art, gilded both inside and outside. Phra Chao Seu dedicated this pala as a monks’ residence. It serves as a memorial for his journey through Khlong Sanam Chai.

Besides, there are the old drum tower, ancient bell tower, and two-era temple. Behind Wat Sai is Mahachai-Wongwian Yai Train Station. There used to be a floating market in the Wat Sai Area. Many people say that it was the most beautiful water market. Farmers would put their fruits and local products in their boat to sell in this market. Later the business slowed down.

Ten years ago the Bangkok Metropolitan Administration tried to renovate it before it became slow again. Nowadays there is only one shop in a house which constantly receives many tourists. It helps to vitalize the place. Location: Soi Wat Sai or Ekkachai Rd. Soi 23

The 3 temples of King Rama IIl

Wat Ratcha Orasaram Ratchawora Vihara is an old temple before the Rattanakosin period,  and it used to be called ‘Wat Jomthong’, a temple of King Rama IIl. It was built in the King’s favorite Chinese architectural style. Wat Ratcha Orasaram is the first temple to be decorated with porcelain. The walls are decorated with Chinese art and a Chinese altar table, which was the only one in Thailand. The plaster base of the Buddha image is very delicate and beautiful.

King Rama Ill renovated “Wat Nang Nong Woravihara”, as you can see his favorite art in the temple and the twin viharas. The distinctive point is its hainess on the double roofs and the roof tiles.

“Wat Nang Rajaworawihan” is an old temple which was appointed as a royal temple when King Rama III ascended the throne. Apart from the beautiful architecture, in the temple there is the “Wat Nang Ratchawora Vihara Education Museum”. Originally built to house the temple’s valuables it was later used to hold agricultural tools that people in the community donated to the temple. It showcases the traditional way of life of the local people which was rooted in agriculture.

Explorenique is also featured on momondo’s Bangkok Guide, one of the leading European online travel agents for price comparison.

Explorenique is also featured on “6 Top-Rated Bus Tours In Bangkok” by CLEVERTHAI.